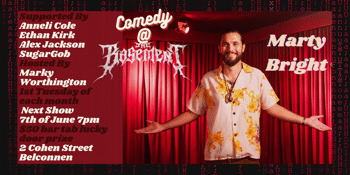 Marky Worthington and The Basement

The Basement - Canberra (Belconnen, ACT)
Tuesday, 7 June 2022 7:00 PM
20 days away
18 Plus
Comedy
Send this event to
Come to Comedy at The Basement on the 7th of June to see Marty Bright, Also on the line up is Anneli Cole, SugarGob, Ethan Kirk, Alex Jackson and your MC Marky Worthington.

Over the past decade Marty Bright has taken his unique, up-beat brand of physical and observational hybrid comedy across Australia, New Zealand, USA and Canada, performing at some of the top clubs including Sydney's Comedy Store, LA's Comedy Store, Broadway Comedy Club (NYC), Montreal's Comedy Works and The Classic (NZ).

He has also been part of the Melbourne International Comedy Festival and Sydney Comedy Festival, where he was hand-picked for the roadshow showcase tour, FRESH program and BREAKOUT program.

Along the way he has shared the stage with some of the top names in the biz, including Dave Hughes, Ronnie Chieng, Matt Okine, Akmal, Luke Heggie, and Fiona O'Loughlin.

Each ticket gets you an entry into the $50 bar tab lucky door prize, announced at the end of the night. (Need to be present to win)

It is highly recommended that to avoid missing out on desired seating, after getting a ticket people going to the show call the bar on 0413 987 609 and book a table, especially if you are planning to have some amazing food from Chompy’s at The Basement before the show.