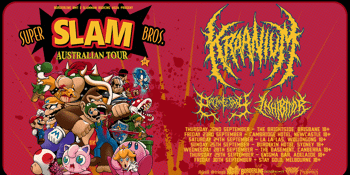 Kraanium was formed in 2001 and are one of the original pioneers of the slamming brutality genre. Originally founded in the depths of hell in Norway, the band is now a multinational slam machine, split all over Europe.

Over the years they have released 5 full length studios albums, 3 split CDS with more releases in motion. They have built up a solid world wide fan base and will continue spreading the brutality of SLAM!

This is Kraanium’s debut down under and they will be joined by fellow deathcore bands Organectomy (NZ) & Inhibitor, if you like your brutal death metal mixed with groovy slams….. then don’t miss out on this killer tour!