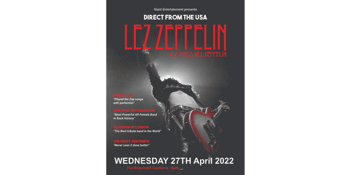 The Basement - Canberra (Belconnen, ACT)
Thursday, 28 July 2022 7:00 PM
71 days away
18 Plus
Rock
Music
Send this event to
Formed in 2004, LEZ ZEPPELIN is the longest running and most successful
Led Zeppelin tribute band in the world, having played the number one rock
festival in the world, Bonnaroo! and the coveted Maddison Square Gardens,
twice.

They’ve been featured on BBC, CNN, ABC, CBS, FOX and MTV. They’ve
featured on numerous festival bills, including Hellfest (France), Rockstock
(Canada), Concert for Mumbai (India), Beerfest Asia, Download (UK) and
Rock on The Range, and over 1000 concerts on every continent for the past
15 years.

With Steph Panes, recognised as the best female rock guitarist on earth and
Leesa Squyres as the number one female rock drummer it’s no wonder New
York Rock magazine SPIN called them The Most Powerful all-female
band in rock history and the Guardian of London calling them The Best
Tribute Band in the world.